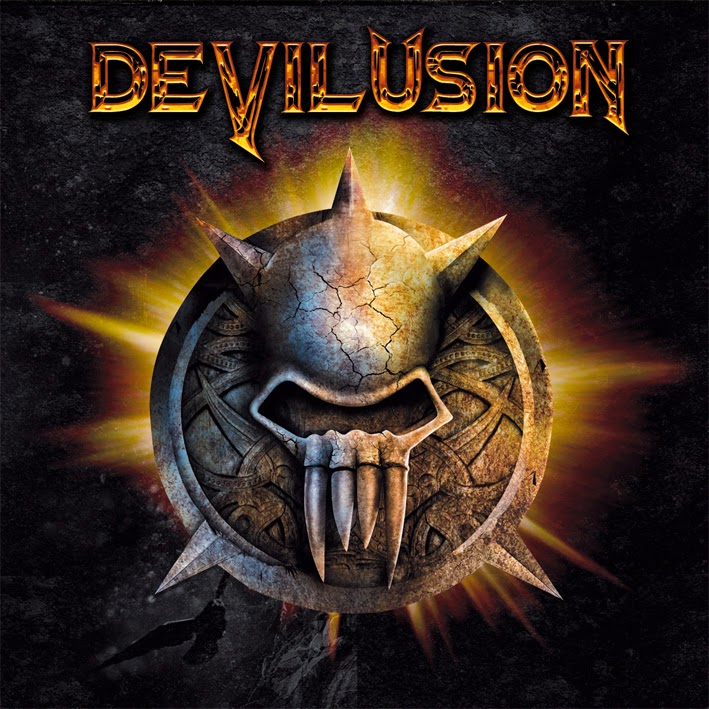 It was with a little bit of surprise my first listening of the debut EP by Devilusion from Krefeld, North Rhine-Westphalia, Germany. You know, that kind of surprise you go through when you listen to a totally new band delivering music that somehow manages to stab you in the back from the very first listening minute. I pressed the play button on my stereo letting a "what the fuck" phrase to slip from my mouth as the first riff of the opening "Intruder" track was hammering my speakers. So for the next twenty minutes (maybe a little more), I left everything aside, focusing on the material of those newcomers.

Devilusion deliver a mixture of Heavy, Speed and Thrash Metal. Listening to their music you would be able to discover a wide range of influences: from Metal Church ("The Dark" and "Blessing In Disguise", era) and Intruder ("A Higher Form Of Killing" era), to Megadeth ("Rust In Peace" era), Anthrax and Iron Maiden. Their songs are perfectly balanced between power and melody. The power that marks the band's Thrash / Speed Metal part, is generated thanks to the main riffing of each song, however the melody and the feeling that re-present the more Heavy Metal oriented part of their music, is generated mainly through the vocals and the fantastic lead guitar parts.

Manos Fatsis (ex Dark Nova) makes the difference in here. You see, on your everyday typical Thrash newcomers (and older ones) you would meet those "angry again" vocals that mark the genre. However in Devilusion's music you would hear melodic vocal lines, double vocal parts and a wide range of vocal expression that mark each and every song. To tell you the truth I was not surprised at all. Having heard the excellent latest Dark Nova album (plus some more music) I was aware of Fatsis talent, which is simply represented in this EP. However the vocals are not the only big thing in here. You can clearly hear a fantastic drummer (Uwe Rudolph), an incredible bass player (Marc Stemmer), and a double axe attack through the hands of Sascha Kuss and Patrick Lessmann. Well those are the pieces that complete the Devilusion puzzle. I would advise you to spend some extra time focusing on the performance and the ideas of each musician in here and you would realize why I am referring to them this way. Well this team works great.

The band have wisely selected "Intruder" as the opening track cause it is the most catchy tune of this EP thanks to its mighty chorus (excellent double vocals). I bet that even on your first EP listening, you would go back to this song on the repeat more than one times, BEFORE you roll to the next one, exactly like I did (air guitaring to its lead part). "Almighty Hypocrites" with its ala Megadeth main verse (thanks to the main riff and the vocals) is another powerful track. The chorus is catchy, the double guitar bridge is great and the lead part is a big plus.

The Thrash and Heavy Metal flavors are successfully combined for one more time under the "Crown Of Gold" song. Great mid tempo chorus and a Megadeth-ish small lead guitar part, before the main melodic guitar lead. Not bad at all. "Raising Hell" is the most technical tune of this release. Many different themes and riffs on different tempos wisely combined on a song to bang your head at. Very interesting mid tempo opening themes (there is a great band line on the initial part of the song), outstanding mid tempo verse, faster bridge before the fantastic chorus and ok what else can we ask for? "Tribe Of Slaves" is the faster track in here. I am sure that this one would be one of their strongest tunes on stage. I really enjoyed the drumming in this one.

The EP's final song is a cover version of "The Four Horsemen". What do you mean by which band? Come on they just re-released their "No Life 'Til Leather" 82 demo tape on time for the record store day a few days back (18/4) and this song was called "The Mechanix" back on this demo. You got it, Metallica is the band.  But I bet that Devilusion selected it cause it was co written by Mustaine, I will ask them on the forthcoming interview. Ok I liked the cover a lot. Fatsis has studied every breath of the young Hetfield adding his own approaching as well, but I am still trying to get why the band left a big part of the song behind. Yes their version is sorter than the original studio recording. Well they basically grab the version that was played live by Metallica which is sorter (check out some of their 90s live stuff), but you know I still miss those lead parts. So to cover or not to cover guys? I guess this is another good interview question. Ok all in all this is a bonus track done for fun I guess, so my point on the sorter version is not a big deal, you can still headbang on the sorter one.

The production is loud and clear and does justice to the songs. It would be a pity such good songs to suffer from bad production but this is absolutely not the case in here. Sascha Kuss recorded all the stuff on the band's own studio. The recorded material was mixed and mastered by Rene Bannasch at Schreiraumstudios, Solingen (Germany).

All in all here we got a release by musicians that first of all are passionate fans of the music they play. This is crystal clear on each and every part of the songs in this EP and you know something? One of the main reasons for each one of my positive comments about this release is the passion I discovered, behind the leads, behind the vocals, the drumming etc etc.

So if you look for a good piece of stormy steel delivered in fast tempos, raw power and touched by a fantastic voice, this one is for you. If you keep yourself amazed by new under the ground stuff coming armed and dangerous this one is also for you. The sure thing is that our eyes and ears should be open to this band, they will offer even more good stuff in the future. For sure.