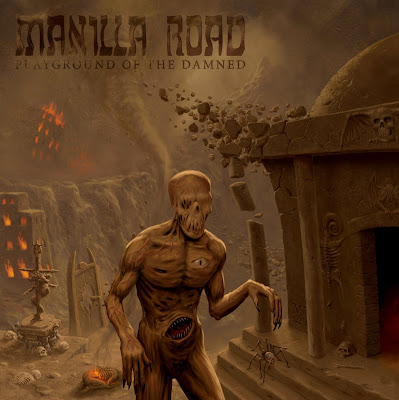 The new Manilla Road albums includes eight tracks and this is a fact that made me attend the first little positive view about the album before even its first listen hahaa. Yes an album that includes eight tracks like the good old days... you know it is a fact that many bands nowadays are putting many songs on their releases and many of those tunes are nothing more and nothing else than fillers. Anyway I am sure you are getting the point: viewing the trademark Manilla Road on the front covering, and taking a look at the 8 and not 12 or 13- tracks included, I was automatically put in my time machine and here we go.
It is a fact that the music of Manilla Road take us back to the glory days of Metal, even back then Manilla Road were carrying their very own special sound. You know what I mean this kind of Epic, Dark and Obscure Steel that made us worship the band through the years and the big question is: Have they managed to keep the spirit of this very special sound on their latest album?

The opening melody of the first "Jackhammer" track that will soon be followed by a classic Manilla Road riff, would give us the first answer, classic Manilla riffing and lead themes, the voice of The Shark to give that very special touch in the song and yes everything is in the correct order, "Jackhammer" has been wisely selected as an opening track for the album, it can be for sure included in the list of the best songs of this album and yes it has became a personal favorite as well.

The mysterious melody of "Into The Malestorm" will soon guide us to a new storm of Manilla riffs and lead themes and yes those lead parts are one of the strongest features of this nice mid tempo tune, the vocals of Patrick sound dark and obsucre and yes the guitar melodies on the final part of the song are really really great.

The song that gave its titled of the album "Playground Of he Damned" will soon follow, a mysterious and narrative Epic song with some interesting riffing, you can also focus to the lead parts once more, they rule carrying an exotic mysterious touch.

"Grindhouse" follows and it is for sure one of the darkest and gloomy tracks included in the record, actually "Grindhouse" is name of a movie released by Quentin Tarantino in 2007. Mark explains: "It relates to the genre and the movies that Tarantino and Rodriguez have been doing such as 'Death Proof', 'Planet Terror' and 'Machete'. I grew up going to Grindhouse theaters and I think it's really cool that the genre is still alive. Just writing about stuff that trips my trigger so to speak.".

What follows is the song "Abbatoir De La Morte" which in its first part is based on absalutely great riffing in the skull-crushing way that Manilla Road have invented. Mr Cory (Hardcore) Christner does some great drumming in here and the bass lines of Mr E.C. Hellwell are the real big deal in here. Well in the second more dark, epic and melodic part of the song I caught myself trasveling back to the early Manilla Road days -debut album?-, soon a new riff would fill the air and the song will get into tis battle mode again, the song's final part would be still marked by the obsucre vocal melodies of Shark and one of the greatest guitar solos included on the record.

The melodic interludes were always one of my favorite features in Manilla Road's music and "Fire Of Ashurbanipal" has one of them, soon it will be followed by another classic Manilla Road riff and Mr Shelton have kept some of his greatest melodies for this slow, dark, narrative and epic anthem, a track blessed by the classic Manilla Road spirit for sure.

The next track is called "Brethren Of The Hammer", you will be able to hear both the war riffing of RoaD plus their melodies of mystery -especially in the chorus-. There battle touch of Manilla Road marks the the song this is a fact, Bryan (Hellroadie) Patrick does a good job in vocals same goes to the bas-line of Vince Golman that play bass in here.

Final song "Art Of War" begins with another melodic interlude the Manilla Road way but this introduction melody is the main basis of the song, it will soon be enforced not only by Shark's vocals but by some really great lead guitar themes. The song will go in mid tempo and thorugh its basic melody there will be some real magnificent -both rythm and lead- guitar parts to be generated until the very final part of the song. This one could be marked as the "Dreams Of Eschaton" of 2011 although it does not have a breaking in upper tempo. No mater the fact that the song remain in the same tempo from the beginning to the end it is driven to an explosive crescendo and final breaking and this makes this song to be the ideal epilogue of the album. For me this is the best tune of the whole album. It includes some of the best lead guitar themes, the basslines of Vince Golman rule and same goes to the drumming of Cory, Shark does his classic narrative, obscene and Epic singing and everything in this song in totally in the Manilla Road mood.

So to go back in the question that I have set in the beginning: "Have Manilla Road managed to keep the spirit of this very special sound on their latest album?". The answer is yes. Manilla Road still got the force, the talent and the big inspiration deliver the Steel in their own special way. The album includes at least three absolutely great songs that have all the background to become Manilla classics: "Jackhammer", "Fire Of Ashurbanipal", "Art Of War", there are also some great tunes that keeps the record in high levels -"Abbatoir De La Morte", "Brethren Of The Hammer", "Into The Malestorm".

A very positive fact is that there is "more singing and less growling" included in the record. Hellroadie does well in his melodic parts but his growls do not fit in the Manilla Road music. It is a fact that Shark's voice is THE trademark in Manilla Road and I can accept the fact that an additional singer could provide the band with some more power but he got to follow the Manilla spirit, so I was happy enough noticing Hellroadie singing and not growling in here.

I would also -for one more time- would like to point on the really great lead guitar themes and solos that are one of the real strong albums in this album. Mark "the Shark" Shelton has done a magnificent job for one more time.

The production does justice to the songs representing the stuff on a sound that travels us back in time. It is a fact that the band have chosen this obscure type of production for their albums: you know what I mean... this special old school sounding that carries a "live" touch that reminds productions made back in the 70s or 80s.

Well to sum things up it seems that The road have manage to release a very good album. Focus on it, listen it carefully, you will discover its treasures for sure.