I recently received an email from guitarist John Lutzow (Leviathan, Braver Since Then). John was informing me about his new project TOMORROW AT DAWN and their first album. "This for sure got to be checked", I thought, and yes this new material was a big surprise to my ears.  This project actually marks the co operation of John Lutzow with an old friend and co musician: guitarist Jason Boudreau. On their debut release entitled "From Diablo to Devereux" TAD deliver a great piece of acoustic and electric guitar based music with lots of prog and fusion elements: Beautiful and inspired music that brings together the universes of  Mclaughlin, Di Meola, and De Lucia under a Rush / Dream Theater prism. On the interview bellow John answers to my questions about the Metal past with John, the birth of the TAD project, the influences, the future and many more.  Enjoy. 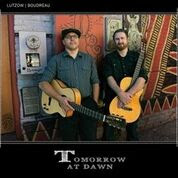 Hello John. Thanks for your time to answer to my questions. So lets take a flashback in time. Can you remember how you got in touch with Jason Boudreau for first time? I remember you mentioning that Chris Broderick was the person that got together the two of you. Can you remember how did this happen?

Chris and Jason were best friends since they were young. I was playing in a band with Chris and our styles didn’t really blend well so he suggested that I jam with Jason. He thought that our playing and personalities would fit together better. After the first day of working on music, Jason and I had a great musical connection.

I know that your first band with Jason was Tyrants Reign (from Colorado, USA). Can you give us some information about them. You may also want to refer to Incarnate Fear which was another band that you participated with Jason on the line up. Years of existence, possible releases and some basic line ups for both bands would be cool.

Yes, Tyrants Reign, was our first band together, that same band later evolved to become the short lived group called Incarnate Fear. We never really released any studio music. We just played a few shows and wrote music together. Tim Lawrence, who sang on the other guitarist from Leviathan’s solo album, Iron Fortress was the original vocalist for Tyrants Reign. Jack Aragon, who later was the singer of Leviathan was the vocalist for Incarnate Fear. These bands existed between the years of 1987-1991. When I left to join Leviathan, Jason formed Quiet Room.

In the early 90s both of you moved forward to new musical adventures under Leviathan and The Quiet Room. I wonder why you did not form a Prog Metal band together?

I really liked working with Jason. The only reason I left to join Leviathan was that they really had momentum in the local scene. Ron Skeen asked me to join and made me an offer I couldn’t refuse. He told me of the goals they had and their plans to record with Jim Morris. I was only 19 years old and it was a business decision. It was tough leaving a group I considered to be my friends for something that was more impersonal and restricting.

Have you been in some kind of contact through all those years?

Jason and I, as well as Chris Broderick would always see each other at shows and around town. The music scene in Denver back in the 90’s and 2000’s was pretty compact. Everyone knew and played with each other over the years. The pond was limited with talent so to speak.

How did you exactly get back in co operation and decided to write music together? When did that happen? Have you got a clear vision of what did you want to compose and deliver musically? Give some more info on how the Tomorrow at Dawn project was born and took shape?

Jason and I reconnected through Facebook back in 2012. We hadn’t talked with each other since the Prog Power Festival in 1997. Back then I emailed Jason and discussed the possibility of him playing the newest Leviathan album. He agreed and contributed a solo for a song off of “Beholden to Nothing, Braver Since Then”.

Once I connected with Jason through FB, we began just working on acoustic songs to do at local coffee shops for fun. Jason had been doing his own solo material where he played guitar and sang. I had also released a few solo albums like that. The material we started playing together was mostly cover tunes. Jason and I would divide up the songs for him and me to sing.

The main concept for Tomorrow at Dawn was kind of born out of seeing a need and trying to fill it. The initial spark occurred when every time I would go downtown to a restaurant or bar, I would hear Rodrigo Y Gabriella playing over the house speakers. That acoustic group is very popular in Colorado. I have seen them a few times and like their music very much. I just think from a guitar shredding perspective, their music is limited. I always wanted to do a full acoustic flamenco album similar to “Friday Night in San Francisco” by Mclaughlin, di Meola, and De Lucia. This was a great shredding acoustic guitar showcase but the song writing was too obscure for the average listener.

From a marketing perspective, I thought if I could get together a few other guys and we could write and release an album that showcased our musicianship, style and song writing ability, we would have many opportunities to play in our own home town. I thought if done right we could hopefully cash in on some of the success from groups like Rodrigo and Tommy Emmanuel.

From there the idea was born. The second motivating factor was that after I finished the last Leviathan album, it seemed like such a shame that someone as talented as Chris Lasegue didn’t want to play guitar anymore. Him and I were never that close before also meeting on Facebook. Back in the 90’s he was the guitar teacher to Jason and Chris Broderick. I had reached out to him about doing a solo for the Leviathan album. He blew me away with what he came up with. So in my mind I had to try and include him in this acoustic guitar adventure I was planning. I wanted to create a showcase of sorts that would have the potential to reach a huge audience in CO and abroad. My plan was to have the three of us; Jason, Chris and I, collaborate on all the songs and lay down a foundation to show off Chris’s exceptional ability.

In the beginning Chris was very much into the project. The first four songs were written and we were about to record when he had to drop out of the project due to family conflicts. It was a serious disappointment to have to move on without him. It did however motivate Jason and I to raise up our game and become better players. 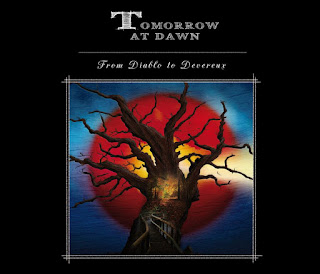 In your own words how would you describe this musical project? What are your main musical influences?

I would describe TAD as the most diverse collection of acoustic guitar styles possible. Full of tasty, thoughtful songwriting and well displayed musical ability. Jason and both really wanted to make an album that would appeal to more than just the progressive metal musician audience. We hope to attain some recognition in our home state and country for once. As for musical influences, for me they have always been the same. Apart from the performers I already mentioned, some top artists that inspire me are; Rush, Dream Theater, Fates Warning, Shawn Colvin, Tori Amos, Jeff Buckley, Martin Sexton, Ben Harper, The Beatles, Jellyfish and Black Crowes.

You actually made a musical contact with the material included on the Tomorrow at Dawn debut album and your guitar work on Leviathan's 1994 release: "Deepest Secrets Beneath". Why this?

I made the reference to DSB because that was the first album after joining Leviathan that I was allowed to contribute as a song writer. So I felt if I could make that association. If people specifically differentiated my song writing on Leviathan albums from that of Ron Skeen, they would have a good idea of what this Tomorrow at Dawn album might sound like.

What about the name Tomorrow at Dawn is there any special concept behind it? And I would ask the same about the album's title "From Diablo to Devereux"...

The name actually came from a search I did where I stumbled across the Victor Hugo poem called Demian des L’aube, which I later had to translate to English to get “Tomorrow at Dawn.” The name jumped out at me as pretty open to musical styles but yet professional, serious and hopeful.
The album title has significance to me in that I wanted to find something that would reveal the full breadth of musical styles and encompass the musical journey of these songs. The words themselves don’t really mean anything but their origins cast a glimpse of what you’ll be hearing. The album has a lot of Spanish influence so that is the Diablo part. To me, it also has a lot of experimental and jazz influence which I equate to French art. That is where “Devereux” comes in.

How did you both work together for the composing part of the material?

Jason and I each wrote basic pieces separately then worked together on letting the songs find a balance and direction.

How long did it take you to finish the composition of the songs? And how long to record the album?

The album took about 18 months from start to finish. We recorded each song as it was finished.

Where was the album recorded? Its production sounds great especially on the acoustic parts. Any special techniques used?

We recorded most of the album at our old rehearsal studio at Denver University. These studios are quite notorious in the Denver area. This is where most top bands back in the 90’s practiced. Jason has rented his room there since the mid 80’s. It is a simple 20x20 brick room. We sound proofed it and set up mics. We recorded everything using a few mics and different acoustic guitars. It was recorded digitally into Sonar and mixed at Atomland studios, which is also at DU. The unique thing about this album that most people wouldn’t realize is that all the sounds you hear are actually played on acoustic guitar. Even the sounds that appear to be synthesizer or orchestra instruments were done on my main nylon string classical which has the most elaborate electronics system available. It has a Ghost midi/ piezo package and a K&K transducer/ mic system. I really wanted to do a project where just two guys on acoustic guitars can fill up the sound live without using sequencing.

Can we mention this as a "one album" project or you got some future -creative- plans for Tomorrow At Dawn?

Jason and I have already begun writing songs for the next TAD album. We want to take this project as far as we can.

Can you give us any quick Leviathan updates? Any breaking news? Any live dates? Is there a new album in the making or what?

Leviathan is in limbo right now. Jeff Ward the singer, Derek Blake the bass player and I are still working together but until we have interest in the form of shows, we are all working on other things right now. My wife and I just had our first baby, so that and TAD keep me pretty busy.

Thanks for your time John. and thanks for the music.

As always, Thank you for all the support. I really appreciate everything you have done to spread the word about my music. Thanks.