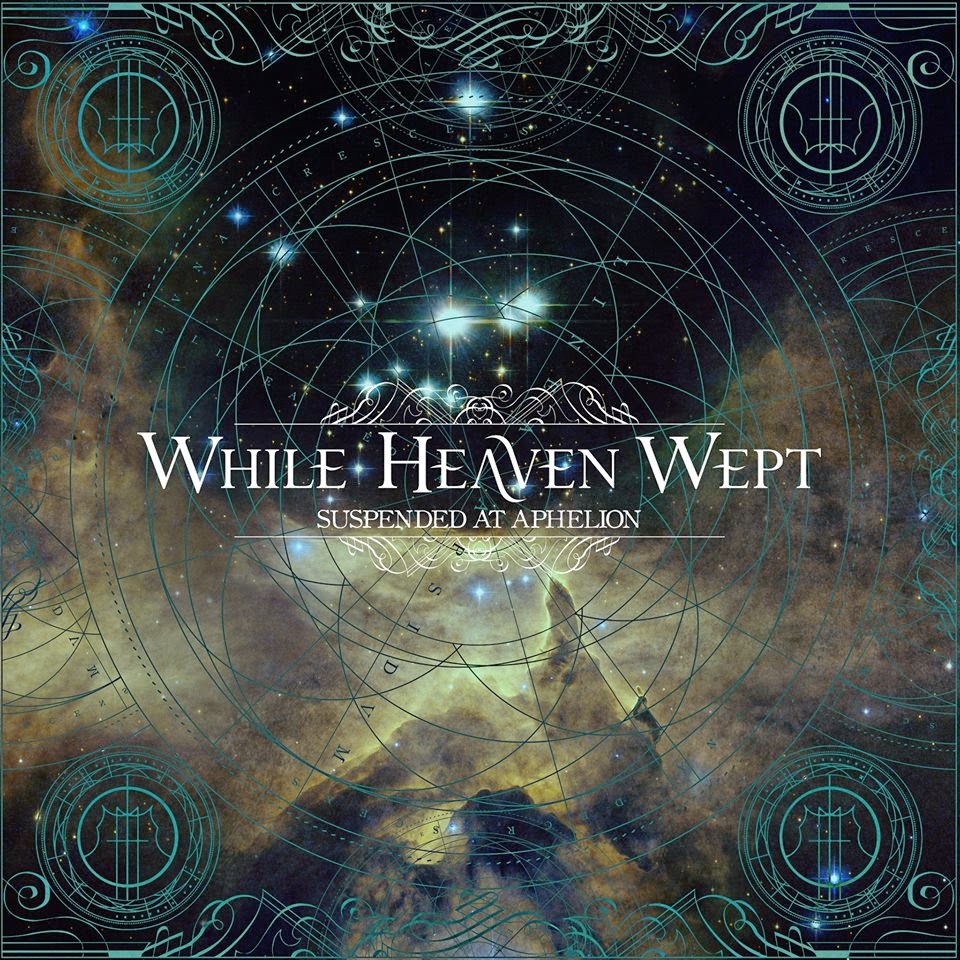 Every new album by While Heaven Wept is a new musical experience, a new musical quest and of course this point should be made for their latest "Suspended at Aphelion" release. Three years after "Fear Of Infinity", WHW return with a new album and believe me there is so much to hear and discover on this excellent album.

Before I go on with the review of the album I must point that "Suspended at Aphelion" is meant to be heard as a whole. Only if you listen the album at once you would be able to fully get into its vibe, as it is actually a single song in 11 parts. You can always listen each and every song on its own but the real magic awaits you only if you really get into the record, listening ti as a whole. That is what Tom Philips himself is also advising you on the inner notes.

All of the songs in here were mainly composed during 2011 (with the exception of two songs which have been composed even later). So it is crystal clear that the music included on this album reflects the musical vibe that the band follows since "Vast Oceans Lachrymose": an excellent mixture of Epic, Progressive, Power and Doom Metal under a unique touch which includes many more musical elements as well.

Yes someone would discover lots of musical elements & influences inside this release. Influences that have been gathered into Philips mind through his journey the last 25 years both as a musician in many bands and as a listener too. So you should not be surprised if you -for example- find some Black (actually Thorn-sh) Metal touches here and there.

The sure thing is that Prog Metal is becoming a serious basis in this record. The inspiration by the golden Fates Warning era ("The Spectre Within", "Awaken The Guardian") is clear, however someone would discover lots of European Prog Metal influences (from the early 90s till the mid 00s) as well (the phrase Spiral Architect on steroids came into my mind when I first heard some of the Prog parts of this record).

Going on to discover the elements and influences of this album I must point that the whole thing is also classically based, full of counterpoint stuff. Not only on musical parts but on song structure as well, there is a serious classical vibe. From song interludes to acoustic and keyboard parts you can discover many Renaissance and Baroque musical touches. Mark Shuping's Cellos and violins and Christophers Ladd's classical guitar would be enjoyed on such parts. Also if you pay some extra attention to keyboards (by Jason Lingle), both on their melodic main parts or their symphonic fillings, you would get more into this classical vibe on the album.

Well all those points sound interesting, but what about the songs themselves? The truth is that album by album it gets harder and harder to describe While Heaven Wept music with simple words. Here we got a magnificent record, full of inspired music that deserves lot of listening not because you would not "get inside it" even from the first listening time but because new musical treasures are waiting for you every time that you would return to this masterpiece. The melancholic / romantic vibe of WHW is still a big trademark in here however the music is expanded into the Prog-sphere, it sounds even more epic and powerful.

I will not refer to each song (as I usually do on such important records), it is difficult to choose anyway and as I already pointed ""Suspended at Aphelion" should be listened as a complete concept. However I should mention the magnificent opening track of the record: "Introspectus" which is a magnificent acoustic interlude, the storm-taking "Icarus and I", the orgiastic Prog masterpiece "Indifference Turned Paralysis" and the apocalyptic "Searching The Stars" as my personal favorite picks from the record.

Tom Philips manages to transform all his inspiration and talent into his big musical vision: While Heaven Wept. We as listeners of albums like "Suspended at Aphelion" are the lucky ones. We enjoy this musical heaven under a universe of influences of a person who is first of all a passionate listener himself.

Rain Irving offers probably his best vocal performance in this album. It is obvious that his voice is ideal for WHW music. I do not know if some parts of WHW songs are composed with his voice in mind or if he manages to get so deep into the music and the vibe, but the result is magnificent. I sometimes try to find a way to explain the beauty and the harmony of his voice and his melodies, but at the end I find myself going back to the songs leaving the thought behind.

Mark Zonder sits behind the drum kit on this record. So you can be sure about the drumming perfection. The bass lines of Jim Hunter fit perfectly in here. And if you listen more carefully you will discover the guitar magic of Victor Arduini (ex Fates Warning) on two of the songs("Reminescence of Strangers" & "Lifelines Lost"). Scott Loose is also delivering the guitar magic, together with Tom Philips they are offering this wide guitar sound that WHW have managed to build. Trevor Schrotz is performing some additional percussion and Michelle Schrotz is also performing additional percussion and is doing harmony vocals. Yes all those talented musicians are important pieces of the puzzle that is called "Suspended at Aphelion".

The production is excellent. I should point that there different masters have been made for LP, CD and digital download versions for the best possible performance. The album was mixed and mastered to be as organic and dynamic as possible and thanks to this fact the production is not following the today's common "as loud as possible" path so it will require you to turn up the volume slightly compared to other releases in your queue from 2014. Tom Philips is clearly pointing this on the album's inner notes, but you will also realize it by yourselves.

With albums like this While heaven Wept manage to go on into the writing of their very own very important chapter on the music book of our times.

I already have written enough. Go on and get the record as soon as possible. This is inspired music, music for the mind AND soul. Heavy Me(n)tal stuff? You could say so hahaha.