When it comes to pure Heavy Metal played the barbaric way RAVENSIRE from Portugal is a band that should not be missed. I have actually been in touch with their guitarist Nuno Mordred since ages (remember his fantastic Graven Image interview on our fourth issue?) so a small friendly chat about Ravensire was an easy task, focused on the band Nuno mentions other interesting topics as well so open your next cold beer and mark his words. For those of you who still have not heard their debut Mini CD you can read our review here. 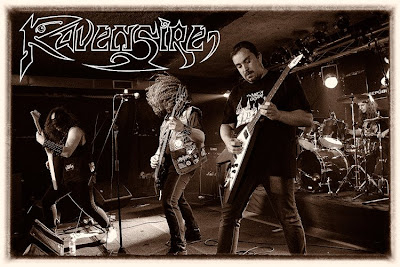 Hail to Ravensire! Welcome to this interview! So let's start with the basic stuff. When the band was formed and under what circumstances?

Hail Chris, thanks for the opportunity to spread RAVENSIRE's word! It all started a few years ago, maybe 6 or 7, when me and Rick started jamming to a few riffs and ideas I had. We thought about doing this band, but it was hard to find people with the same state of mind and, besides, our personal lives were going through some hazardous times, so we ended up waiting for better days. And, finally, in late 2010, F (a long time friend and ex-guitarist) decided to start learning how to play drums and so we finally could begin our quest!  A few months later, both Zés (Gomes - vocals and RockHard - guitar) also jumped on board and there you have it! 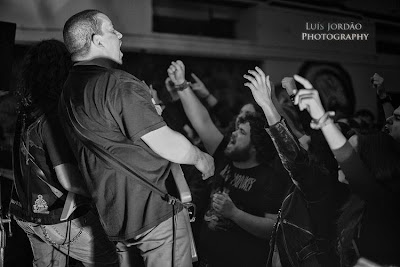 Looking back on your bio I am noticing that the members of the band are coming from various other Portuguese groups. What was that common point that made you joined forced under the Ravensire moniker?

Heavy Metal! True, pure, unadultered Heavy Metal! We don't want to play anything too complex, too technical... We just want to play raw and passionate Heavy Metal, the kind of music we all have loved for quite a long time! Of course, some might enjoy more a particular style than the others, but it all comes down to classical, old-school Heavy Metal.

Is there any specific concept behind the band's name? What does it mean?

Ravensire is the lord of ravens... The lord of the dark abyss! We wanted the band name to reflect our passion for obscure Heavy Metal but, at the same time, to be different from the usual "Steel", "Battle" or whatever... Not that we have anything against that! Far from it! But we wanted to build a kind of concept attached to the band, so the ravensire is here to stay and you'll get to hear stories from him as the albums go by. So far we did the song "Ravensire" which talks about his adventures when joining the forces of the abyss... Next album there'll be a song called "Warriors to the Slaughter" that continues to explore his meanderings in the dark side. 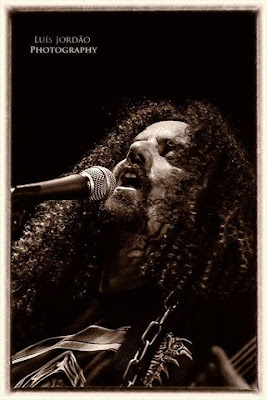 What was the first song that the band composed?

The first track we, as a band, started working on was "Stay True, Stand Tall". Before we were a proper band, however, I already had lots of material that ended up on all the songs on the EP and a still more that we're working now for the album.

You have your Mini CD recently out, can you give some info about it?

On the mini-CD "Iron Will" we opted to record 4 original tracks and one cover. The idea of the cover was to pay a tribute to the 80's Portuguese Metal scene, since we all were part of it and I can tell you it was vibrant! The reason we chose to cover WILD SHADOW's "Sweet Desire" was because we enjoyed the song a lot, WILD SHADOW never got the recognition they deserved back then and, besides, Zé Gomes was their first singer!

Are you happy with the final result of the Mini CD?

We're very happy! The songs came out the way we had envisioned them, thanks, in great part, to the work of the producer Paulo "Paulão" Vieira!  We already knew very well his work (he produced, among others, 2nd and 3rd IRONSWORD albums and MIDNIGHT PRIEST EP), but to see him work his "magic" was amazing... He's a very important part of our studio sound, that's for sure, and we're counting on him for the new album!

How would you describe your music to someone who has never heard of the band?

In two simple words: RAW and PASSIONATE... That's about it! We pour our hearts out when we play! It may not be technically perfect or particularly original, but our soul his 110% there. 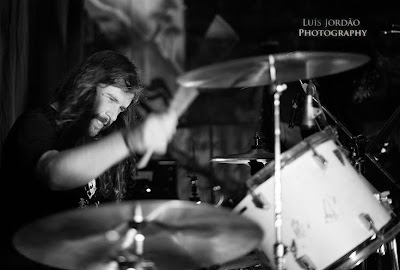 Which bands would you point as main influences?

Nowadays, I see a lot of bands quoting their influences and using ultra-obscure names. Maybe it's "cool" to show so much knowledge... But for me, the MAIN influences are those bands we've been following almost all of our life, so I'd say: IRON MAIDEN, MANOWAR, RUNNING WILD, OMEN, MANILLA ROAD, BROCAS HELM... Then you have newer bands who help shape your sound, even though they might not be a MAIN influence... I'm talking about DOOMSWORD and SLOUGH FEG, for example!

You recently had some line-up changes. Can you refer to them?

Basically, Zé Gomes decided he wanted to leave the band due to some turmoil in his personal life. There was no bad blood at all, and we remain great friends and he goes to our gigs and supports us A LOT! We only have words of praise when it comes to his time in the band and his dedication! Hail mr. Zé Mastercrow!! After his departure I immediately thought about Rick to take over the vocal duties, as I already had heard his vocals when we were making those experiments in the early days... He was a bit hesitant at first, but with some encouragement he finally made up his mind! In the meantime we've been playing live as a 4-piece and it's working out really well!! 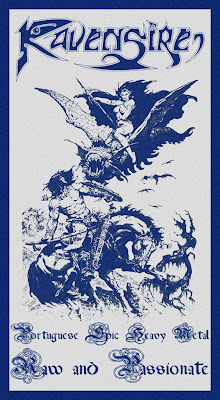 I guess that delivering this type of traditional Epic / Heavy Metal is the main goal of the band. Your music speaks for itself. Well there was a recent re generation of interest around those genres let's say the past 10 years. Dedicated festivals, new bands playing the classic inspired stuff, new fans, re unions and similar stuff going on? What is your opinion about this general moment?

It started really well in the early 21st century... But recently it's getting a bit "out of hand". I mean, there's more interest in some 50 year olds who released a demo-tape 30 years ago, than in new, vibrant bands! I have nothing against 50 years old people playing Heavy Metal (hell.. I'm already in my 40s!!) but where were they 10 or 20 years ago when no one cared for Heavy Metal!? There are some reunited bands I respect a hell of a lot... But there's also a lot of other bands who kept the flame burning during the "hard times" whom I respect a whole lot more! Bands like SLOUGH FEG, DOOMSWORD, SKULLVIEW, SOLSTICE and countless others who were playing HEAVY FUCKING METAL when no one cared for it! So, all in all, I'm enjoying less and less this resurgence... Let's see what'll happen in 5 years...

What is "Heavy Metal" to you? A kind of music or something more?

It's a whole lot more than music! It's an obsession! It's a state of mind, actually! It really doesn't matter where you come from, what's your social status, whatever.. Adapting a bit what SACRED STEEL claims: "If it's in thy blood, thou'll understand it"! hahaha 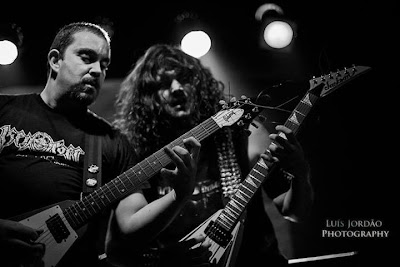 Tell about the Metal scene in Portugal. Any valuable bands to check out.

Nowadays there's a kind of a micro-boom of Heavy Metal bands. My favourites are still MIDNIGHT PRIEST (editor's note: the band is currently looking for a singer now, check all the details here), of course! But it's worth mentioning INQUISITOR with their Teutonic-Speed Metal attack; THE UNHOLY with their "SAVATAGE meets QUEENSRYCHE" approach but with a lady-screamer, and CORMAN, the next Doom Metal sensation featuring our great friend and "A Forja" maniac Francisco! GARGULA (featuring guys who used to play in ALKATEYA) also released a very interesting mini-CD last year!

Speaking about other bands from your country I wanted to ask what have finally happened to Ironsword (taking as a fact that your bass player played into them you probably could spread some light). Are they still around?

Well... The fact is that no one knows! Rick hasn't seen or talked to Tann in years and there's absolutely no news whatsoever. I guess you should try asking Tann... hahaha

Are you in prepare for your next step after the Mini CD release. And what this step will be?

Well, actually we'll take two steps! The first is a split-7'' single with our friends TERMINUS from Ulster. We'll contribute with "Drawing the Sword"... Soon, there'll be more news about this one, so be prepared! The second step is the release of our first full length "We March Forward" on Eat Metal Records! We already finished the recordings of 9 new songs and, if all goes well, on late October it'll be out to the conquer the world! We would like to send A VERY BIG hug to maniac Francisco from "A Forja"! He's done more for us than we ever deserved! Also, we'll be heading to Athens for the 2014 edition of "Up The Hammers", so hopefully we'll have you there on the front row banging your head!! (Chris: yes you will!!!!).

Ok that was it guys! Thanks for your time!

Thank you!! If people are curious about us, they can get in touch through http://www.facebook.com/Ravensire or through our email ravensire.epic@gmail.com