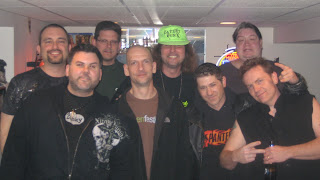 Power / Prog Metallers Latent Fury from Chicago, Illinois, USA are back in action. The band formed around 1989, their saga ends around 1994. In 1991 they have released their same titled demo tape. The band's re union somewhere around 2010 is a very important fact for the Power / Prog Metal scene, one of the most talented bands of this specific genre is back. Well, this is a good chance for an interview don't you think? Guitarist Chris Lotesto answers our questions about the past, the presents and the future of the band. 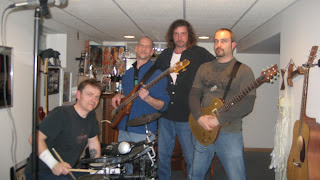 The band has already started to re-work in their old classic tracks -from the demo era- and re presents them in new killer versions.

This another picture taken from the second rehearsal that the band has done together in 15 years. The line up is: Chris Lotesto on guitar, Ken Green (who played on the demo) is on bass, and John Ashe is on drums, of course Tom Sobczynski is on vocals. Focussing on the current stuff that the band works on we can refer to some song tites: "Disturbing The Dead" is something brand new that Tom wrote and after John played drums on the recording, it inspired Tom to get the reunion going. There are also -as already pointed- new versions of "Messanger Of Death" and "tTe Visionary" classics from the 1991 demo.

For those who are not aware of the band here is a review of their classic 1991 demo-tape:

Latent Fury started their journey to the Metal world in 1989. Key persons behind the band was guitarist Chris Lotesto and singer Tom Sobczynski. One year after their first formation they delivered a three track demo tape. Three tracks that can be described as a perfect mixture of Crimson Glory and early Fates Warning enforced by some Iron Maiden touches here and there but all this under a melodic, brilliant, high quality musical background the same that can be enjoyed only in US Metal releases. What I am enjoying most in this release is the melodic interlude in "The Messenger Of Death" and the one in "The Visionary". "Messenger Of Death" is nothing but a US Power Metal anthem touched by the magic hands of mother melody and still remaining pounding enough to make our fucking heads bang. Will you live to see tomorrow? hehehe...

"Streets Of Fire" is the more traditional Metal piece of this release with no melodic interlude mostly carrying a Maiden / Priest touch but still the US Metal way. Search for a little Crimson Glory influences in a more up tempo version and you will find something in this song.

The epilogue belongs "The Visionary" which is the most technical song in this release enforced once again by a beautiful melodic interlude that will soon finish to let the ultimate riffs of this song to fill the air enforced by amazing lead themes and vocals. You would also enjoy the melancholic breaking in the middle of the song followed by a magnificent lead part before the song gets wild again, great song for sure, a mysterious Power / Prog anthem only for those who had good taste in Metal. I am still not able to choose which one is my favorite "Messenger Of Death", "Streets Of Fire", or "The Visionary" . Anyway it does not matter.

Unfortunately the band ended up the journey in 1994 (difficult era for a band if the music was not fucked up grunge shit). The singer Tom Sobczynski kept the name but the guitarist Chris Lotesto kept the rest of the band members and formed another great US Power/ Prog band Ion Vein.


In the next issue of Forgotten Scroll Zine -number 5- there will be an exclusive Latent Fury interview full of unreleased information and photos.