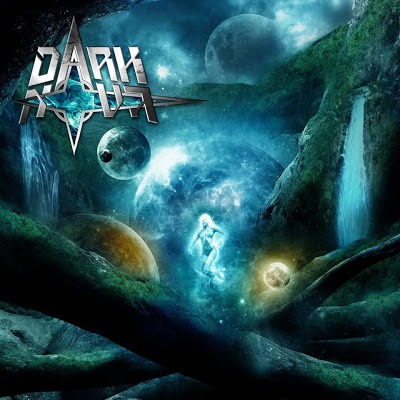 Well this is a real comeback, cased closed. The Greek Neoclassical / Power Progsters Dark Nova have not only managed return back in action after an eight year silence (it was 2005 when their "Sivilla" album was out) but they did it through an album that can for sure marked as their best release so far.

What was -and still is- the big deal with this band is that they are capable to offer inspired and powerful songwriting and this is the key feature to their same titled recent release. If you are into Metal stuff in general you would for sure be able to point thousands of bands re presenting their talented musicians and their professional productions through their albums. Ok Dark Nova have all those features but they have something more: good songs.

The band have released an album that perfectly balances between the melodic Prog Metal, the European Power Metal and the Neoclassical Metal. As I already pointed they are presenting a very special way of song writing emphasizing mostly on mid tempo parts full of glorious melodies and catchy memorable choruses meanwhile they are enforcing each and every song with brilliant lead guitar parts and beautiful keyboard themes. They pay serious attention into their song's structures providing an adventurous result that keeps the listener stuck into every song.

As influences I would like to mention Conception ("Parallel Minds" album), Kamelot ("Dominion: and "Siege Perilous" albums) while on their fastest parts you will be able to meet some of the Lost Horizon's (Sweden), spirit. If you pay closer attention to the lead guitar parts Of Mr Elias Koskris you will discover a lot of Malmsteen and Impelliteri influences, the keyboards of Marry Tassouli are carrying a classical touch from time to time making the songs even richer.

At first point I was some kind of afraid that the on the 12 songs that are included in this record I would be able tot rack down some fillers. It happens all the time especially when an album consists of more than 10 songs. Well you would also be surprised enough to discover how wrong I was. Let's go for a little song by song reference:

The opening "Calling Of Angels" tune would introduce you to the record through a melodic interlude and a mid tempo main part. The catchy chorus is the big trademark of the song and yes you would also focus on the magnificent vocals of Manos Fatsis. A lead part full of agony will catch your attention in the middle of the song, while the keyboards are filling  with some extra melodic touches this mid tempo opener. What follows is a massive Power Metal blast and one of the best songs of this album -if not one of the best sons that the band has written: the same titled "Dark Nova" anthem. In fast tempo, enforced with some killer guitar parts, some really great keyboard melodies and a chorus that would stick into your mind.

The next "Dying Earth" tune keeps the tempo up and from the first second it can be marked as a straight in the face attack thanks to its opening riff.Another memorable chorus can be heard in this one, groovy and shining, thanks to the way that it is combined with he blasting part of the song. The atmospheric narrative part before the main lead add some extra vibe. great song.

The melodic interlude of "I'll Be Forever" would get you on a beautiful ballad and soon enough the following "I Will Not Give In", a song in an adventurous structure, balancing between power and melody, I like the Prog attitude of this one. Another mid tempo tune comes next, "King Of Lives", great main part theme and lead guitar parts in this one. It is followed by "Lost In Silence", in here you will be able to hear a blasting main part enforced by some of the best vocals that Mr Fatsis has recorded. You would better pay some extra attention to the melodic piano parts and focus to the evolution of the song second by second, only then you would be able to notice how flexibly the band combines the main blasting Power Metal basis of the song with a Prog, mid tempo, musical bridge just before the main guitar lead. This is pure talent my friends.

Another classic Heavy Metal riff would take you by storm on the beginning of "My Heaven Is Real" a song that re presents in -once more- perfect balance the neoclassical, Prog and Power Metal elements of Dark Nova. "Time Flies" is following and to be honest I am finding a little difficulty to describe such a beautiful song. This is the BEST song of the entire record. Lyrical, mysterious, exotic and Powerful this is a real Heavy / Power Prog anthem.

Reaching the end of the album you will be able to the epic and dark "Veil Divine" track just before the f"We Are Nothing" tune, a mid tempo, aggressive, explosive tune that puts the final mark on the record.

I hope that my dear reader would allow me to make an extra reference to the ultra solid, ground taking rhythm section of Mr. Maranis (who recorded the bass on the album) and Mr. Adams (who is behind the drum kit). Those two musicians are making the songs to sound even stronger and for the musical style that Dark Nova deliver, a powerful rhythm section is something more than important.

The production is fantastic doing justice to the songs. The album was engineered, mixed and mastered by Evagelos Maranis (hail Sanvoisen) at Maranis Studios / Deutschland. Mastered for iTunes by Dr. Makis Tselentis.

Finally a special mention should be made about the album’s great cover, realized by South American artist Felipe Machado Franco renowned for his covers for Blind Guardian, Rhapsody of Fire, Gamma Ray etc.

Well to cut a long story sort. Go for this album with no second thought. This record is the result of pure talent. Nothing more, nothing less. It is available on itunes since December 15th and January 2013 it will hit the stores on physical format. Well what else can I say? Welcome back Dark Nova!

A final note: My review is based on the tracklist of the Metal Breed Records advanced promo, the final track list of the record is a little different.