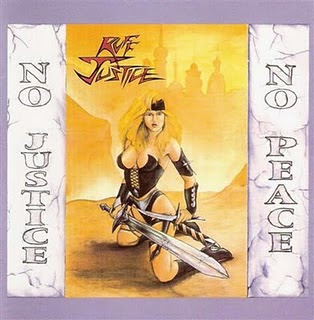 If there was a God of Justice -or perhaps some better luck?- in the Metal Universe this band from Dallas, texas, USA would be really big. I mean it. Their saga was not that big but this release was for sure their ultimate trademark -they have also released the Just Us live tape and the Wings Of desire CD) and the big proof of what that band was able to do musically.

"No Justice No Peace" was released back in 1995 on CD under the moniker of A.R.T. record label -drummer of the band Scott Baughn was behind the label-. It includes eight tracks of excellent melodic US Power Metal with some Prog touches here and there. The solid riffing, the magnificent guitar leads and themes and above all great vocals are some of the features of this release that would make all of the fans of bands like Queensryche -first period-, Heir Apparent and Crimson Glory, to worship this release.  It is a fact that Ruff Justice ha don't got the talent to deliver some excellent riffs, they got the talent to release complete songs  able to shine like diamonds in the Metal universe. A good riff can almost delivered by anyone, an outstanding Metal song is difficult to be created and believe me this release includes more than one outstanding Metal anthems!

Songs like "Trouble In Paradise, "Sanctuary", "City In Flames" and of course the same titled magnum opus "No Justice No Peace"  are for sure the absolute pick ups from this release. The album has been re-released in 2010 by Retrospect records, the label works on the band's next re issue -Wings Of desire- while Ruff Justice are already in studio working on their follower album entitled "Propaganda", a full detailed interview with the band can be read don the next issue of Forgotten scroll zine, so keep an eye open for it!